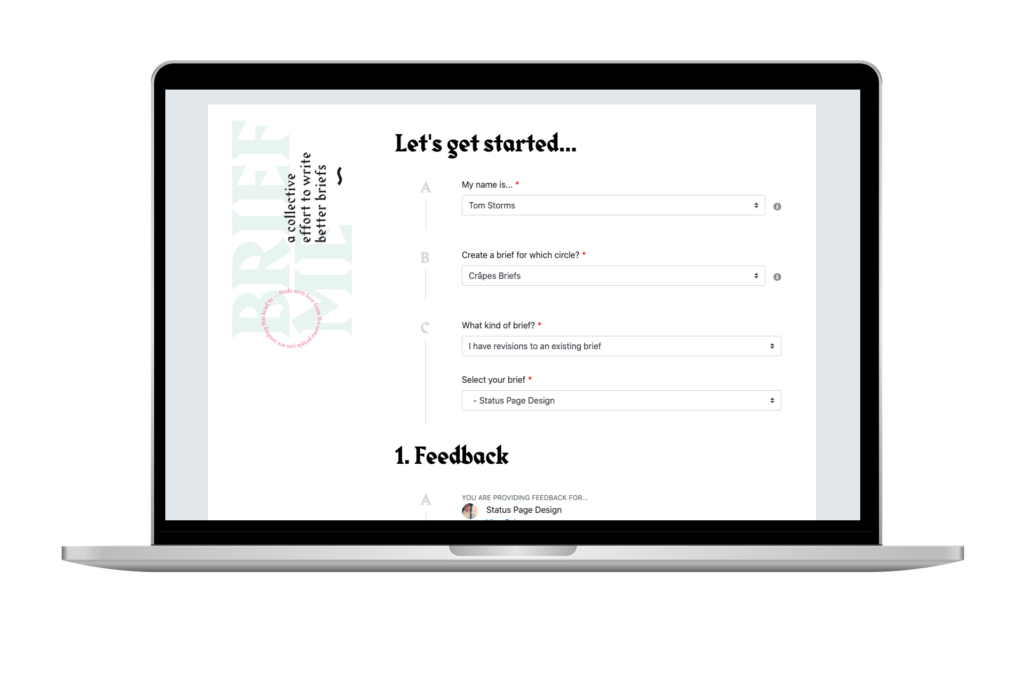 BriefMe is an internal briefing tool used by the team at Orange Digital. It’s a tool that supports the process of asking the right questions a designer/developer/marketer/SEO person needs to complete their job.

“We need an easier way to brief our teams for work that needs to be done”.

When a brief for the team needed to be created, it often lacked the important information a designer/developer/marketer/<job-position> would need to get the job done.

When researching for this idea, we observed:

It was obvious – a new process for creating briefs needed to be established.

We set out to:

Our designers got to work visualising what the workflow of BriefMe could look like and how it could work.

I silently worked on creating version 1.0 based on the designs. We initially thought using Materialize for the form elements would be a good fit. It was only during development that I found (at the time of build) some components didn’t give the right data we needed to capture data (technical info: their Chips component only returned the selected text value – instead of their ids). After much re-coding, hooks, workarounds, I removed Materialize and used standard Bootstrap form elements instead.

This HTML version basically captured form data into a variable.

Internally we use Toggl for tracking project hours and use monday.com for daily scheduling tasks for the team.

With efficiency in mind, I integrated the Toggl API (to help pre-fill information such as users, clients and projects) and the monday.com API (to read boards, board groups, individual pulses, users; and to create and assign briefs).

With these integrations in place, we launched BriefMe internally and started getting feedback on the tool. Based on user testing and feedback we started to make several iterations to the user experience and simplified the form and prioritise the most important information first.

Another tool that we use for long term planning is Resource Guru. To avoid manually creating tasks from monday.com to ResourceGuru, it made sense to connect with the Resource Guru API and create a new booking.

Another feature of Resource Guru is their utilisation report. The possibility of being able find out when a resource would be available, and to have an accurate estimate of when a resource could potentially complete the task, was motivating to give the integration a try.

Though I was able to integrate with the API, things started to get messy.

Items on monday.com and Resource Guru would be in sync. I created a script to sync each person’s monday groups with Resource Guru.

In the end decided to remove this integration completely and resort to Resource Guru being manually updated by our team leaders.

For security, I implemented a simple CSRF token. You can learn more about this concept in my Github repo. As a result the method that verifies the token only has a minimum of 30mins before the token expires. As the submission part is handled by AJAX, we found that a user may put a lot of information into the brief to later loose their work because their token expired. As a result we disabled the CSRF token completely. Not ideal, but given this is an internal tool, this wasn’t such a big impact.

Today, BriefMe is a successful tool that has become a standard for briefing our team internally.

Now that the tool was setup, we needed a way to remind people to continue to submit briefs. It’s easy for a process to be forgotten over time.

As we use Slack, I thought it might be handy to create a bot that can give the team a bit of a nudge and a reminder to get their briefs in:

BriefMe for Clients – yes, this makes sense this could be the next evolution of the project. A platform where we could extracted the information needed for our internal team, rather than the vague statements of “I don’t quite like it” or “I’ll let you come up with something nice”.

For the Slack Bot, as we already integrate with Toggl, we could pull in useful project time budget stats. We could broadcast the amount of hours remaining of a project’s budget so everyone has transparency and start a discussion if we’ve gone over budget.